Day One NY, a nonprofit that has been educating youth about dating violence since its launch in 2003, added a program last year to teach consent to elementary school students to reach children as early as possible. The organization had previously only taught older students, in middle school and up.

“[Day One] realized that we really needed to be doing some foundational work around consent education and healthy relationships education before sixth grade,” said Jett Bachman, who leads the Early Childhood and Elementary Initiative for Day One. The program has residency in two city schools, one during the day and the other after school. It also teaches in other schools that sign up for the initiative.

“If young people perceive that their friends think that dating violence is acceptable, they’re more likely either to experience or perpetrate violence,” said Bachman. “Dispelling this myth that it’s normal to experience that in your relationships is really important, because people are having that validated as normal all the time by the people around them.”

Nationally, one in three teens reports dating abuse. And reports in physical dating violence have risen in the city over the past 20 years, according to Day One. There are 1,400 calls every month from teenagers to the NYC Domestic Violence Hotline. In the past six months, a Brooklyn teen was allegedly killed by her ex-boyfriend and a Queens man was convicted of kidnapping and raping a 15-year-old girl he met online.

Bachman does not mention sex or dating when teaching consent to grades K-5. For older elementary school children, Bachman talks about things that are more relatable, like what to do when someone looks at your phone without permission.

“We talk about consent and that it is a similar word for permission and that you have a right to set boundaries,” said Bachman, who believes it is crucial to start teaching consent in kindergarten. This includes training enough teachers so they are qualified to instruct on sex education and consent.

“With even younger kids,” added Bachman, “it’s a lot about talking about touch as well. They’re so much more moving around all the time in their bodies, and I think it’s important to talk to them about asking each other to give hugs or to do those types of things.”

Bachman is also a member of the Sexuality Education Alliance of New York City, which advocates for more comprehensive sex education for K-12 students. A survey of city students in grades 6-12 by SEANYC in the 2015-2016 school year found that 59 percent had not learned about consent in school or elsewhere. 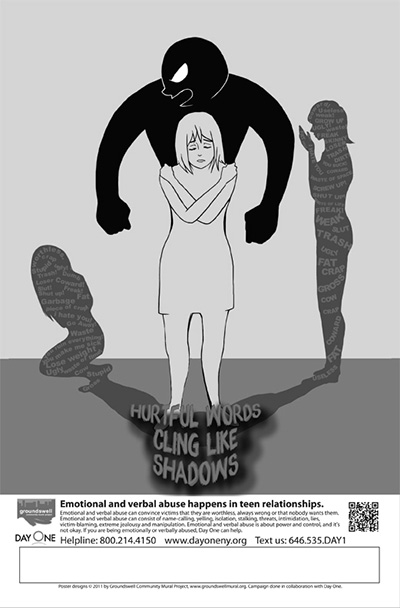 A poster by Day One NY.

Lavender Gonzalez, a Brooklyn native who is 15 years old, didn’t have sex education classes until middle school, and considered them inadequate. The classes lasted five weeks and only addressed biological issues.

Sandra Torres, program manager of the Healing Center NY, a nonprofit working to end dating violence, believes it is crucial to teach children about consent early on as they may live in abusive households that provide bad examples.

“They become witnesses, and then they follow that same pattern,” said Torres. “But if we start educating them in schools, of what a healthy relationship looks like, to critically think, ‘Oh this is acceptable, this is not acceptable,’ giving them the tools will be a preventive method so later on when they are in a relationship they already know what’s healthy and what’s not.”

Campoamor wants to end a culture that sees “coercion as romance, and consent as debatable.”

“I have a 3-year-old son who I teach consent to,” she said. “You can teach consent without sex, and it can have an effect as they grow and start dating.”

Quentin Walcott, co-executive director of CONNECT, a nonprofit that works to end relationship violence, sees dating abuse as part of a bigger picture. Walcott works with boys and young men to change common views of manhood that can include power and sometimes lead to abuse. Walcott says teaching consent in sex education is important, but the lessons can’t end there.

“It’s a deeper, longer conversation,” said Walcott. “Places where they don’t have power in their lives, to use that as an example of how getting someone’s consent is important and crucial.”

Culture is important too, said Walcott, citing sexual innuendo in cartoons and music videos that feature men in powerful positions and women as sexual objects.

“It’s a culture transformation that we need,” said Walcott.

PARENTING IN THE #METOO ERA