How Parents are Tackling Consent in the #MeToo Era

When Christine Luis decided to teach her three young children about consent, she recalled a time in her childhood when she didn’t always feel in control of her body.

“We grew up with the mindset that you have to kiss and hug your relatives even though you’ve never met them before,” Luis, 38, said. “And if you don’t do it, then you’re rude or not raised correctly.”

The Queens-based mom noticed the same thing happening to her 8-year-old son, Sam.

“Relatives and friends would shower him with hugs and kisses, but he wasn’t enjoying it. I realized, ‘Why are we forcing him to do this? He doesn’t want to.’”

Whether it’s playful roughhousing with an uncle, or a peck on the cheek from a classmate, Luis says she encourages her children to speak out against unwanted touching.

“Whether someone is doing something mean or nice, if you don’t enjoy it, you must tell them, ‘Please stop, I don’t like that,’” she said. “And that became the mantra.”

Discussing consent might be uncomfortable for some parents, but Luis and other parents are starting to have these conversations in the wake of the #MeToo movement and high profile sexual harassment cases. Some parents are discussing consent with their children as young as two years old, which is something some sex educators encourage. Educators say instilling ideas about bodily autonomy in young people from an early age can contribute to their physical and emotional well-being, and help promote healthy relationships in the future.

A 2017 study by Harvard University that surveyed 3,000 young people found that 70 percent of young adults from ages 18 to 25 wished their parents had spoken more about the emotional aspects of sex, including consent, intimacy, and relationships. More than one-third said they wish they’d gotten more guidance on “how to avoid getting hurt,” and half said they never spoke about “being sure” a partner wants to have sex.

The report says that most parents focus more on anatomy and disaster prevention, orienting their talks on avoiding pregnancy and STIs. As a result, the study found that a large number of young adults are unprepared for caring, lasting relationships, and are anxious about developing them.

Sex educator Amy Lang said one of the reasons many parents aren’t talking about consent is because they assume that their sons already know that “no means no.”

“We all imagine that our boys are not going to grow up and be rapists, that they know it’s not okay to force someone to have sex with them,” said Lang. “But it’s not enough. Consent needs to be out loud.”

Lang also said that parents likely didn’t have open and healthy sex talks with their own parents, leaving them without a place from which to draw.

This was the case for Emmie Prete, 47, who said her parents didn’t talk about sex, let alone consent, due to a traditional background.

“We didn’t have conversations like this with our parents,” said Prete. “My mom’s version was ‘Don’t let anyone touch you. You shouldn’t be around boys.’” 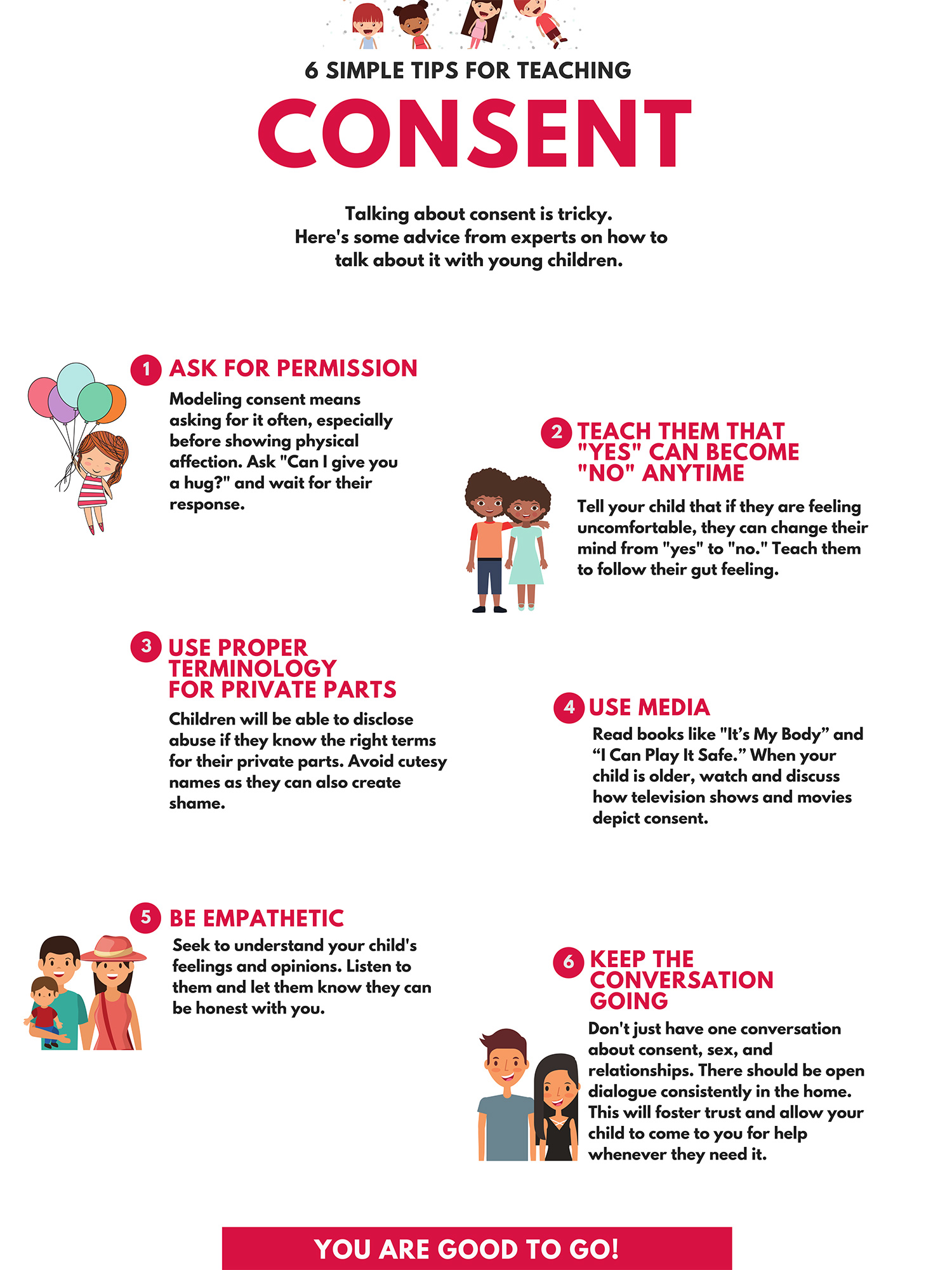 Prete says that because children today are exposed to sex earlier, in part due to social media, she and her husband Frank first had a conversation about consent with their son Frankie when he was in the seventh grade.

“If you go to kiss a girl and she tells you no, you stop. You don’t force yourself on her,” Prete, 46, recalled her husband telling their shy son.

At first, Prete was upset by how direct her husband was, but she later realized it was needed when she witnessed a young boy walking up to her 8-year-old daughter and touching her chest. When Prete immediately explained to her daughter that she shouldn’t allow people to touch her, she said she was baffled by her reaction.

Lang said part of the reason why it’s difficult for some parents to talk about consent is because they associate it solely with sex, and when parents don’t feel ready to have the sex talk, they shy away from teaching consent completely. But Lang says describing consent in non-sexual terms is also important and an easier way to get the conversation rolling.

For parents who don’t know where to even begin, there are outside resources available to help guide them. Sara Flowers, director of youth initiatives for Love Heals Youth Education Program, holds workshops on consent and sex education for adults and children in New York City.

“Helping [adults] to be more comfortable is super important, and that’s what our workshops aim to do,” said Flowers. “It’s a conversation starter.”

Books, pop culture, and educational videos online are also tools parents can use to teach consent. It’s been helpful for Luis, who reads books like “My Body Belongs to Me” and “It’s Not The Stork!” to her children.

Luis said consent is an ongoing discussion in her home now. It’s made a difference in how her children treat others, how they respect each other’s personal space, and how they assert their own bodily autonomy.

“My daughter is three and a half and very much her own person. She’s very vocal and the first one to say ‘I don’t like that,’” said Luis. “And I’m very proud of her for it.”